Locomotion strategies for quadruped robots – a seminar with Michele Focchi

Legged robots are mainly designed to traverse unstructured environments where wheeled robots have limited mobility. Their applications range from nuclear decommissioning to mining, search and rescue, inspection and surveillance. In addition, they can be applied to flank human workers (or collaborate with them) in order to reduce labor accidents, as well as in elderly care. The next generation of legged robots are envisioned to operate either autonomously or semi-autonomously (through tele-operation) over uneven terrains. This requires the rejection and compensation of disturbances, the exploitation of visual feedback, and the ability to manipulate both fragile and heavy objects. The main ingredients for legged locomotion are planning, control, perception and state estimation. Numerical optimization is a promising tool for motion planning and control for legged robotic systems in complex geometry environments (e.g. multi-contact scenarios) because it enables to push the machine up to the performance limits.

Indeed, when the complexity of the terrain increases, or when the execution of the requested task involves highly dynamic motions, numerical optimization and machine learning strategies are needed to automatically find feasible trajectories and control actions that could not otherwise be determined. In this seminar I will mainly focus on the planning aspects and on different strategies to achieve effective locomotion across complex terrain. 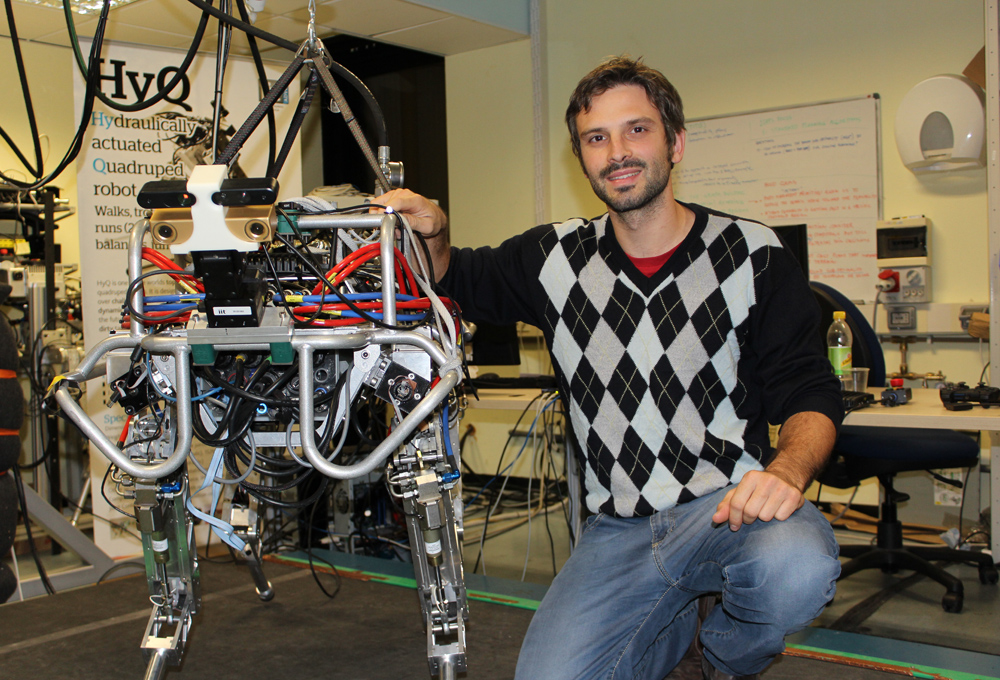 Michele Focchi is currently a Researcher at the DLS team in IIT. He received both the Bsc. and the Msc. in Control System Engineering from Politecnico di Milano.
After gaining some R&D experience in the industry, in 2009 he joined IIT where he developed a micro-turbine for which he obtained an international patent and a prize.In 2013, he got a PhD in robotics, getting involved in the Hydraulically Actuated Quadruped Robot (HyQ) project.
He initially was developing torque controllers for locomotion purposes, subsequently he moved to higher level (whole-body) controllers and model identification. He was also investigating locomotion strategies that are robust to uncertainties and work reliably on the real platform. Currently his research interests are focused on pushing the performances of quadruped robots in traversing unstructured environments, by using optimization-based planning strategies to perform dynamic motion planning.